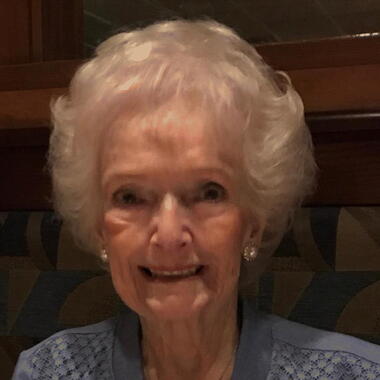 Lallande Witherspoon of Allen, Texas passed away on October 11, 2019 at the age of 91. She was born on November 3, 1927 to Joe Parker and Ella (Clisbee) Witherspoon in Wichita Falls, Texas. Lallande received her bachelor's degree from University of Texas in Austin. She married Ernest Slaughter, Jr. in 1957 in Wichita Falls, Texas. They moved from Wichita Falls to Norman, Oklahoma and then to Spring, Texas. They raised four sons. Later Lallande moved to Tulsa, Oklahoma where she worked at the US Army Corp of Engineers until her retirement. She was a lifetime member of PEO and a member of Chi Omega Sorority in Austin. Lallande was an avid fan of collegiate sports and rooted at times for both UT and OU. Her family remembers her as a loving, devoted mother. She is survived by her sons, Mark Slaughter, Scott Parker Slaughter, and Stephen McCulloch Slaughter; grandchildren, Kathryn Park Slaughter, Megan Kelly Slaughter, and John Witherspoon Slaughter, II; and other loving family and friends. Lallande was preceded in death by her parents, Joe and Ella Witherspoon and son, John Witherspoon Slaughter. To convey condolences or sign an online registry, visit TJMfuneral.com.
Published on October 15, 2019
To plant a tree in memory of Lallande Witherspoon, please visit Tribute Store.

Plant a tree in memory
of Lallande

A place to share condolences and memories.
The guestbook expires on January 12, 2020.